The phenomenon of spreading through networks and cascading behaviors is prevalent in a wide range of real networks. Examples include contagion of diseases, cascading failure of technologies, diffusion of fake news, and viral marketing. Formally, an “infection” event can spread contagion through main players (active/infected nodes) which constitute a propagation tree, known as a cascade. We will examine two model classes of diffusion:

The key intuition behind the game theoretic model is that a node will gain more payoff if its neighbors adopt the same behavior as it. An example is competing technological products: if your friends have the same type DVD players and discs (e.g. Blu-ray vs. HD DVD), then you can enjoy sharing DVDs with them.

Every node independently decides whether to adopt the contagion depending upon its neighbors. The decision is modelled as a two-player game between a node and a given neighbor. Hence a node with degree plays such games to evaluate its payoff and correspondingly its behavior. The total payoff is the sum of node payoffs over all games.

If there are two behavior and in the network and each node can adopt a single behavior, the payoff matrix for the two-player game is as follows:

We define to be the threshold fraction of a node’s neighbors required for the node to choose i.e. requires .

A node can adopt both behaviors and become by paying a cost . The resulting payoff matrix (without cost applied) is as follows:

Let us examine an infinite path graph where everyone begins with behavior/product except for three nodes of the following cases. Let us also set . 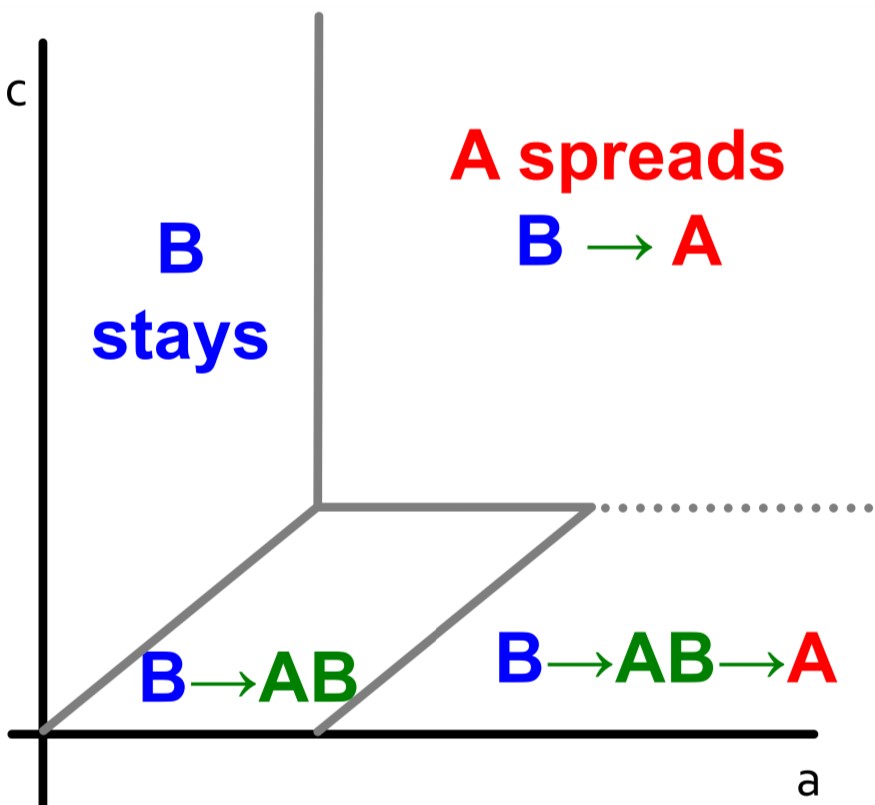 The graphs show how different regions of values impact the decision-based diffusion:

Epidemic Model based on Random Trees